Survey vs Feedback – What is the Difference?

What is the difference between a Survey vs Feedback?

A survey is generally a series of specific questions that are asked as part of an overall survey whereas feedback is a collection of information and is tied to specific questions rather than entire surveys. Surveys are usually pushed to the user asking for them to answer a series of questions compared to feedback that is usually received more naturally where the user is sharing their feedback.

Feedback is the collection of information. This can be specific to a company, product, person or experience.  Feedback is generally collected by asking a specific questions such as, How was your experience today? Feedback is usually received in a more natural format and more open ended. Response rates can be much higher when asking for feedback since it’s more natural. One Click Feedback can drive an even higher response rate since it’s quick and easy to complete.

What is a Survey?

A survey usually consist of a series of questions that are being asked. This could be related to collecting feedback or doing research on a specific topic. Surveys are usually pushed to the end user and asked to answer specific questions. Survey data is more in-depth and detailed, however, the response rates are typically much lower than feedback response rates.

Survey vs Feedback OR Survey + Feedback?

While there is a clear difference between Survey vs Feedback there are many similarities they share.  A Feedback Survey is a type of survey that is designed to get feedback from a user. This can be a customer, employee, etc. The feedback survey is structured to gain insight into a product or service from the end user. Feedback survey is sometimes referred to as a customer satisfaction survey. 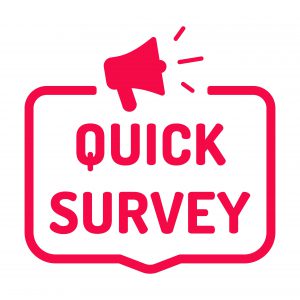 What should you know about surveys and feedback?

Surveys are only valuable when you ask the right questions. That’s why building and deploying a useful and helpful survey to gather feedback is no small feat.

Although surveys and feedback have differences, they also share similarities. A feedback survey is a combination of both. It aims to collect information from your customers or employees in an efficient way.

Businesses can benefit from a feedback survey because they can gain valuable information from their client’s experience and they can improve their performance based on the client’s responses. A popular example of this is our restaurant customer satisfaction survey where quick feedback is collected directly at the point of sale.

A good feedback survey asks the right questions to get efficient results.

For additional information on survey vs feedback and how SurveyStance helps companies collect customer feedback, please check out our SurveyStance Blog.